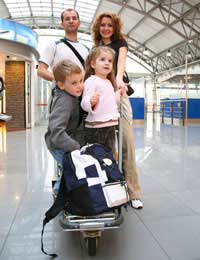 Many children are extremely conservative about food, foreign or not. Some won’t touch yoghurt if it’s got ‘bits’ in it and others refuse to eat the crusts on their sandwiches. It usually pays to breathe deeply, stay calm and wait for children grow out of such faddy habits – which mercifully they nearly always do.

But if a family is going on a foreign holiday, they don’t have the luxury of time – and many children are suspicious of foreign food, even if they’re not particularly fussy at home. So it comes as no surprise that parents often dread the prospect of feeding their children while they’re abroad. Thankfully there are some strategies parents can use to help.

Give Them Time to Get Used to it

Most children thrive on routine and tend to prefer what they’re used to. Before going on holiday, it could pay dividends to introduce some of the foods they’re likely to encounter.

Find out about the country being visited – the library is great source of travel books or surf the internet. As well as discovering all the exciting places to visit, include local customs and local foods as part of the adventure. Talk about what sounds nice and then try to recreate a few dishes at home. Supermarkets usually have a surprisingly wide range of exotic ingredients or there are specialist shops in many larger towns.

Going out to eat is one of the highlights of a holiday for many adults. But if the children are going to create a fuss, things will rapidly turn sour.

It’s worth saying at this point that children might be more adventurous abroad than at home. Unfamiliar surroundings can be exciting rather than intimidating and the sight of local families enjoying their food together can be enough to make children want to try some for themselves.

If that’s not the case, don’t despair. Try to choose an eating place that suits everyone. Usually there’ll be something the children will eat, even if it’s just a piece of grilled fish – which of course might be absolutely delicious if it’s freshly caught. It won’t be exactly the same as at home, but if the children are hungry and their parents don’t make an issue of it, they will probably give it a try. If not, don’t insist and let them fill up on bread and fruit.

Sad to say, many children will opt for chips, a glass of coke and an ice cream if they’re on offer. But if it means a peaceful, happy mealtime, perhaps that’s not such a bad thing. Or parents could dispense with the coke and ask for some milk or orange juice alongside to improve the nutritional value. Remember it’s only for a week or two and they won’t come to much harm even if they don’t touch a vegetable the whole time.

Once they’re happily tucking into their food, try putting a few things from the local menu on a side plate for them – they are much more likely to try it if they’re not under pressure.

Many families find self-catering the least stressful option. They can still eat out if they feel like it, but there’s always the safety net of choosing food at a local supermarket. Most children will opt for the foods they know, but the adults can have fun cooking up the local specialities in a relaxed atmosphere.

It might sound like a bit of a sell-out, but taking along a few familiar foods might help things to run a little more smoothly, particularly if the holiday destination is very remote or culturally different. Obviously these must be things that won’t go off during a long journey or take up too much room in the luggage, but it’s amazing what a jar of Marmite can do for a child who feels a long way from home.

Don’t Force it and Have Fun!

If they keep a cool head and relax, families with even the fussiest eaters can enjoy food on holiday. When they’re back at home, they can return to healthy eating habits and hopefully some of the pleasures of eating unfamiliar foods will have rubbed off on the children – but no doubt it will be a few years before they admit it!
Next Page

Dealing with a Child that is Always Hungry