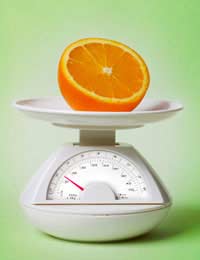 The number of calories that a child needs changes as they grow and their activity levels change (see ‘How Many Calories Does Your Child Need?’) While strict calorie counting is not necessarily healthy, it is a good idea to know roughly how many calories that different foods contain, and to know which foods should be kept just as treats.

The levels of calories in fruit depends on the amount of starch and water it contains - an apple is less starchy than a banana, for example, and contains more water.Fruit are low in fat, and high in fibre, vitamins and minerals, and the sugars in fruit are more slowly absorbed than processed sugars, so are less likely to cause blood sugar highs and lows. Dried fruit is much higher in calories than fresh fruit, but in sensible amounts still makes a healthier snack than sweets and chocolate, especially as it contains more fibre, vitamins and minerals, and is lower in fat.

Fast food tends to be high in fat and calories.Fast food is sometimes the only option when out and about, and is fine as an occasional special treat, but consider a filled baked potato rather than a burger and fries – this will be lower in fat (especially if you miss out the butter and cheese) and higher in fibre.

The calories in milk, whether it is animal or plant in origin, depends on the fat levels.Different types of milk have different levels of fat, protein and vitamins and minerals. Children can have full-fat milk as a main drink from one year old, and can switch to semi-skimmed milk at two and skimmed milk at five years old. Channel Islands milk makes a tasty treat on special occasions, but is much higher in fat and calories than other types of milk.

Like fast food, sweets and snacks tend to be high in calories and fat, and the sugar and salt levels can be high too.Sweets and snacks make great occasional treats, but should be eaten in small amounts at one sitting, rather than ‘grazed’ at all day. Encourage children to brush their teeth after eating sweets or chocolate. Homemade biscuits and cakes can be made with wholemeal flour to increase the fibre content, and less sugar than recommended in the recipe, to make them a bit healthier – and try replacing some or all of the fat in cakes with cooked apple to cut the calories even further.
Next Page

The Myth of Superfoods