Home > Teenager Nutrition > How to Tempt Your Teenager's Taste Buds 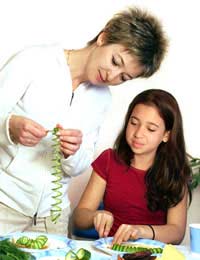 Teenagers are growing rapidly, and it’s important that this should be supported by a balanced and varied diet. However, they are also gaining independence, and their food choices may be as much influenced by their friends and the adverts that they see than the messages they get at home.

Tempting Them to Eat

The media is full of images of very slim models and celebrities. Over half of teenagers are on a diet at any one time, and around 10% say that they are always on a diet. Some diets are very extreme and unhealthy. Keeping a good variety of tasty low fat, low salt and low sugar foods in the house, and eating well as an example, can help tempt them to eat, as can support about body image and teaching them about the role of healthy eating and exercise as an alternative to dieting.

Up to around one in 20 teenagers suffer from anorexia (see Anorexia and Your Teenager’) – if it looks like a teenager is suffering from anorexia, it’s vital to speak to a doctor as soon as possible.

Tempting Them Away From Junk Foods

Teenagers are surrounded by adverts for junk foods, and eating too much, or eating the wrong things, can be as big an issue as not eating enough. As a parent or guardian, its impossible to police what they eat away from home, but it’s a good idea to suggest alternatives – for example a baked potato rather than chips, or a grilled burger rather than a fried one – and then to make sure that what they eat at home is as healthy as possible (see ‘Kicking a Junk Food Habit’).

Some teenagers, like toddlers, are not keen to try new foods, and some of the techniques used with small children might work with the bigger ones too. Offer a variety of foods but not too many at any one time, try offering new foods alongside favourite foods, and don’t make too big a deal over it – it’s never a good idea to establish a bad relationship with food by fighting over it with any children, from toddlers to teens. Linking new or healthy foods to things that they care about – like body image or stamina in sports – might help.

Teaching Them to Cook

Teaching a teenager provides them with useful skills, and can be a way of persuading them to try new flavours, or make healthy alternatives to junk foods. Allowing them to select what they are going to cook for themselves (or even for the whole family) gives them more independence and more choice.

It’s not always easy to persuade a teenager to help out around the house (though this is not true of all teenagers of course) but getting them involved in cooking from an early age and showing them that it’s fun and creative can help.

Further education colleges and even some schools run evening and weekend cookery courses, ranging from simple introductory courses to specialist courses such as Indian, Thai, Chinese, Italian or vegetarian cooking, as well as courses on baking bread and making and decorating cakes. And what starts as a hobby could even develop into a career!