Home > Ask Our Experts > How Will Tea and Coffee Affect a Young Child?

How Will Tea and Coffee Affect a Young Child? 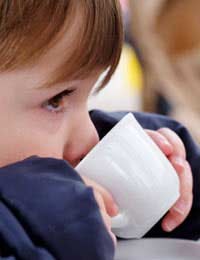 My son is 2 and a half years old, his grandparents think nothing of giving him soda, as well as "sips" of their coffee and tea, despite my husband's and my protests.

Can you please tell me the effects of coffee on a 2&1/2 year old so I can give them facts so they will listen?

Thank you for asking this question as it is something that many parents worry about and you are totally normal in your concerns as most parents wonder whether their child will be damaged by caffeine.

In fact, there is little research been carried out regarding the effects of caffeine on children so it is often the subject of debate.

I too would be concerned especially if the child’s grandparents drink freshly brewed coffee as this contains the highest content of caffeine.

Your child is still very young so it is safer to limit or totally avoid any exposure to caffeine at this stage.

Caffeine is a known stimulant and in high quantities can produce effects such as increased urination, changes to the nervous system, decreased appetite and of course insomnia which is something that most parents will happily avoid regarding their children.Experts do tend to agree that excessive caffeine in children can lead to changes in mood and behaviour which can have a negative effect on their ability to learn, play and socialise so this could be enough to discourage the grandparents or make them more aware of the consequences of their actions. A toddler has a much smaller capacity for managing the effects of caffeine so to be on the safe side, it is probably best avoided.

However, it is not just tea and coffee that contain caffeine as many soft drinks (including some of the clear drinks), non-carbonated drinks, sweets and chocolate also contain fairly high levels also.

Perhaps you could suggest a change to de-caffeinated coffee using the health benefits to the grand parents as your rationale?It may also be worthwhile giving them a list of which products contain caffeine and at what level. This may take a little research but it may be something that the whole family could benefit and learn from.

Although a few harmless sips of coffee or the odd drink of fizzy pop may pose no immediate health risk to your child, there is potential for the effects to be more noticeable within their character or normal habits so this may be all you need to arm yourself with information that can be used when you next approach your son’s grandparents with your requests.