Home > Toddler Nutrition > Dos and Don'ts of Feeding Your Toddler

Dos and Don'ts of Feeding Your Toddler 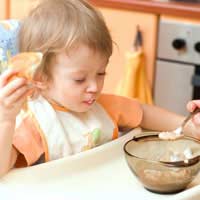 As with most aspects of child rearing, there are few hard and fast rules when it comes to feeding your toddler. Some children will polish off everything on their plates without a fuss; others are much more picky. Some children ‘graze’ throughout the day, while others are ready for substantial meals almost as soon as they’re weaned.

Having said that, there are some basic ‘dos and don’ts’ that should get toddlers into good eating habits right from the start:

Do Provide a Balanced Diet

‘Balanced’ means including carbohydrates, protein, fats, vitamins and minerals and fibre. As long as a toddler’s diet includes a good mix of these, he or she will be getting the nourishment needed for energy and growth.

Convenience foods have their place in every family’s diet, but it’s best not to use them all the time. They tend to have high levels of salt which can damage a child’s immature kidneys and lower levels of vitamins and minerals than fresh foods. They may also contain a lot of chemicals, such as artificial colours or flavourings.

Do Offer Snacks During the Day

Most young children can’t keep going without a few snacks between meals. Their stomachs are small, so they don’t eat a great deal at once and they usually burn off calories very quickly. Opt for healthy snacks like fruit, raw vegetables and toast rather than sugary cakes and biscuits.

Fast food, sweets, crisps and biscuits provide poor nutritional value and are bad for children’s health if eaten too often. But they shouldn’t do any harm as an occasional treat and banning them altogether will probably backfire. Adopting a sensible approach from the start should avoid it becoming an issue.

Do Continue to Give Milk

Milk is an important part of a young child’s diet, even after weaning. It has proteins, vitamins and calcium, which is essential for healthy bones and teeth. Whole milk is best for children up to the age of at least two. There are also ‘follow-on’ formulas available, which have added vitamins and iron.

Don’t Let Your Toddler Fill Up on Drinks

Of course it’s essential that children get plenty of drinks throughout the day to keep them hydrated. But at mealtimes, make sure they have enough food before gulping down their drinks or they could be too full up to eat. Water is a good mealtime drink. Choose fruit juices in preference to sugary squashes and fizzy drinks, which are bad for children’s teeth.

Do Let Children Feed Themselves

Toddlers love to be independent and are more likely to eat well if you let them take charge. Try serving food in small pieces they can eat with their fingers and let them experiment with cutlery. Expect some mess – some newspaper under the chair and a bib will make clearing up much easier.

Sitting down together to eat is a good habit to get into, as a prelude to sociable family meals. Children are also more likely to choke if they’re running about and eating at the same time.

Try to avoid food becoming a battleground. This is often easier said than done, because toddlers are quick to exploit any chinks in their parents’ armour! Tips to bear in mind:Food and toddlers can be a tricky combination, but by following a few basic rules and a bit of patience meal times needn't turn into a battlefield.

Can a Toddler Be Vegetarian?

How Dangerous Are Food Allergies?

How Diet Can Boost Your Toddler's Immune System