Home > Teenager Nutrition > Should I Worry About My Child's School Dinners?

Should I Worry About My Child's School Dinners? 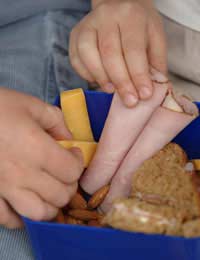 Many parents worry about what their children are eating at school believing quite rightly that a good meal at lunchtime will help their children concentrate and contribute to a balanced diet.

Thankfully, after the public exposé of ‘turkey twizzlers’ and the like by TV chef Jamie Oliver, junk food is on fewer school menus. But how can parents be sure their children are getting a decent meal at lunchtime?

Perhaps it’s best not to get too worked up about it, because children eat the vast majority of their meals at home. However, there are a few things parents can try to help their children eat as well as possible at school.

Look at the Menu Together

Find out about the school dinners on offer. Many schools publish menus on their websites or send them home with the lunch bills. Chat about the menus together:Parents can identify what they like too, what they would choose and why. Broaden out the conversation to include general messages about healthy eating, balanced diets and so on.

Some schools ask children to order in advance. With younger children, it’s an opportunity to have some input, although it’s best to let them have the final say. For older children, it’s a chance to let them take some responsibility and they may well rise to the challenge by choosing sensibly – particularly if there’s a good example set at home.

If the school operates a cafeteria system, don’t make children promise not to eat chips or insist that they take a salad for example. It’s bound to backfire. Parents are more likely to succeed by staying cool and letting the children make their own decisions.

What if They’re Not Eating Anything?

If parents suspect that a child isn’t eating anything at all at lunchtime, try to find out why. If there’s something putting them off – like food fights, an unfriendly lunchtime supervisor or a bully in the queue, perhaps something can be done to help.

If they just don’t like the food, see if they can take a packed lunch instead. If this isn’t an option and they eat well at other times, don’t panic and make sure they eat a good breakfast and a healthy snack when they get home.

If the Menu is Bad

If the food at school is really poor – with no healthy choices for example – parents might want to approach the school or the local education authority and press for improvements. It’s a fairly hot topic at the moment and there are plenty of resources out there to help with a campaign.

A packed lunch can solve the problem for children who hate school meals. It also enables parents to monitor what their children are given. Avoid putting crisps and chocolate in every day – some schools make this easier by banning such snacks. Ideas for healthy lunchboxes include:

Eating Disorder Signs & Clues
Share Your Story, Join the Discussion or Seek Advice..
"What if They’re Not Eating Anything?" "If they just don’t like the food, see if they can take a packed lunch instead. If this isn’t an option and they eat well at other times, don’t panic and make sure they eat a good breakfast and a healthy snack when they get home". Why should I pay for my children to STARVE at school.Children should have their main meal at lunchtime to give them the opportunity to burn calories and recharge the brain cells.Do panic, when your child returns from lunch and can't concerntrate on their work because they are so hungry.For some families on low income, a school dinner can be the main meal of the day.FACT between 10-27%of children are living in poverty in the UK, that includes children who are malnourished.That is unacceptable -school dinners were set up to address this by providing a nutritious meal.When children are allowed to choose for themselves this can be far from nutritious.One lunchtime, I witnessed a child eating mash, rice and spaghetti hoops (the vegetable option) in one lunch time.So are school dinners healthier than a healthy packed lunch?At least with the option of a packed lunch (which unfortunately my children don't have), I have a better idea of what they are eating and can plan a tea-time menu around that.
Indi - 8-Apr-12 @ 10:46 AM
All this "good" advice about school dinners is way off mark.I have been in a couple of schools, sampled the dinners and found the quality to be poor and tasteless, which puts my children off eating vegetables and other dinners. Where in the world are spaghetti hoops classed as a vegetable?The North East of England that's where. As for approaching the schools and LA, forget it.They are in each others pockets!.The LA won't do anything because they need funding from the schools to maintain services, the schools won't do anything because it is just too much trouble to search for other service providers and probably more expensive. Are children starving on school dinners? - Absolutely!I hear of many children who are famished because the so called 'choice' is not there by the time they reach the end of the queue.As for deciding what to eat beforehand by selecting from the menu - again - forget it.The caterers can swap the menu last minute, there may not be enough of the children's choice available and so supplies run out.Dinner ladies in some schools 'put aside' dinners to take home to feed their families.(I admit, I haven't witnessed this for a while, but I have no reason to believe it doesn't still go on) which again reduces the choice for the diners.Fresh fruit salads are tinned fruit with a piece of fresh apple or a couple of fresh grapes thrown in.When I pay for a dinner I expect my children to recieve a dinner, not a ham sandwich with some boiled carrots!Is that what this sites nutritionists class as a quality, healthy school dinner?
Indi - 8-Apr-12 @ 10:28 AM
Title:
(never shown)
Firstname:
(never shown)
Surname:
(never shown)
Email:
(never shown)
Nickname:
(shown)
Comment:
Validate: