Home > The Basics > Drinking Water: Why and How Much?

Drinking Water: Why and How Much? 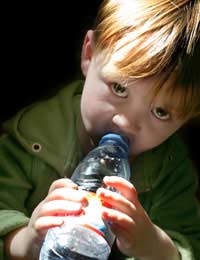 Everyone’s body is about 60 to 70 percent water, especially the blood, and the brain and muscles also contain plenty of water. It’s important for everyone, including children, to drink plenty of water, especially in the summer. However, this doesn’t necessarily mean that children have to force down glass after glass of plain water, or that their parents need to buy lots of bottled water – the water can come from drinking any fluids and from food, as well as from drinking plain tap water.

For adults, the UK Food Standards Agency suggests the equivalent of six to eight glasses of fluids a day (about 1.2 litres). This should be tailored to children, as smaller children will not need as much fluid, and drinking too much fluid before meals might stop them eating enough. Like everyone, children should increase their fluid levels in very hot weather or after a lot of exercise.

Children under one year old should have milk (breast or formula) as their main source of fluids, and if they seem thirsty or the weather is very hot, they should only be given a few ounces of water after feeding, once they are no longer hungry. Children can have full fat milk from one year, and semi-skimmed milk from two years. They should not have skimmed milk until they are five years old.

Does It Have To Be Water?

Drinking plain tap water is probably the simplest, and is certainly the cheapest, form of fluids.

As well as drinking plain water (which isn’t always very popular), children can get their fluids in the form of milk, milkshakes, squash and diluted fruit juice. Watch out for the high sugar content in many milkshakes, squashes and fizzy drinks, as these are fattening and cause tooth decay. While pure juice is natural, its sugars and acids can still damage children’s teeth.

All food contains water too – the juicier a fruit, the more water it contains – but even a banana contains about 75 ml of water. Other foods containing water include vegetables and cooked rice and pasta, and even meat contains water.

Bottled water is convenient, but tap water is just as clean and wholesome, and it’s free. It’s much less harmful to the environment to drink tap water from the kitchen tap than to drink bottled water that has been shipped in large quantities half way across the country (or even half way across the world), and packaged in millions of plastic bottles. Instead of buying bottled water, refill empty plastic bottles or buy a plastic, aluminium or steel drinking water bottle and fill it up from the tap.

Too much water can cause water intoxication, where body fluids become too diluted. Symptoms include confusion, drowsiness, blurred vision, cramps, poor co-ordination, nausea and vomiting, and irregular breathing. This is unlikely to happen through drinking normally, but it is a good idea to keep an eye on babies and small children in swimming pools to avoid them swallowing too much water.