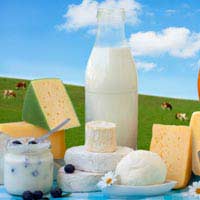 Bones might seem to be solid, but they are actually made up of a spongy network of calcium, and they are constantly being broken down and reformed. In children and teenagers, more bone is deposited than ‘withdrawn’, as the skeleton grows. It’s important to eat well and exercise throughout childhood to make bones as strong as possible, as most of the skeleton’s bone mass is formed in the early or mid twenties, and peak bone mass is achieved at around 30.

Calcium is the mineral that makes up bones, and is the most common mineral I the body. It’s very important for growing children to have plenty of calcium as they grow. Calcium is found in dairy products, including milk, cheese and yogurt, and these also provide protein and energy, as well as vitamins and minerals. Other sources of calcium include fortified foods including rice milk, soya milk, fruit juices, cereals or bread, tofu, dark green leafy vegetables, broccoli, sesame seeds, pulses, beans and lentils, dried fruit, almonds, oranges and tinned fish with bones, such as salmon and sardines.

As children grow, they will start to want drinks other than milk, but it’s a good idea to make sure that they have a drink of milk every day – perhaps as a warm bedtime drink, or in a milkshake or smoothie (but watch out for sugar levels). Mixing extra dried milk into sauces or soft food like mashed potato, or making soup with milk rather than water, can help to get extra calcium into the diet.

Drinking too many fizzy drinks that contain high levels of phosphate can reduce the levels of calcium in the bones. Too much caffeine and salt can also affect the calcium levels in the body.

Vitamin D is also important for healthy bones because it helps the body absorb calcium. Foods containing vitamin D include dairy products, oily fish, fortified cereals, and margarine and other spreads. Vitamin D is also produced in the skin, and just ten to 15 minutes of sun exposure a week provides enough vitamin D.

Being a Role Model

It’s important for parents to act as role models where healthy eating and taking in plenty of calcium and vitamin D is concerned – children, especially younger children, will copy what their parents do and learn from them.

What Else Affects Bones?

Smoking may reduce the absorption of calcium, and weight-bearing exercise improves bone density.

…if children don’t get enough calcium or vitamin D as they grow? They can develop rickets (softening of bones), brittle bones or bones that don’t grow evenly, and can be at risk of osteoporosis in adulthood. There are reported to be significantly more fractures in children and young people than two generations ago, and this may be because they are less active, drink more fizzy drinks, and don’t drink as much milk.

Why is Breakfast Important?