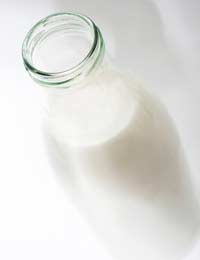 Milk intolerance is generally an inability to break down lactose, a sugar found in milk. It is not the same as milk allergy.

Lactose is the form of sugar found in cows’, goats’ and sheep’s milk, and has to be broken down before it can be absorbed by the gut. People with lactose intolerance do not have enough of the enzyme lactase, which breaks lactose down into glucose and galactose, which can then be absorbed. Gut bacteria then breaks down the lactose that isn’t broken down by lactase, which causes symptoms like diarrhoea, feeling nauseous, bloating, stomach pains and wind.

In general, babies naturally have higher levels of lactase than older children and adults.

Lactose intolerance can be diagnosed using breath tests or blood tests in older children, and tests on the stools in younger children and babies.

Lactose intolerance can be inherited, or can be caused by another digestive disease such as coeliac disease, Inflammatory Bowel Disease (IBS), or Crohn’s disease. Lactose intolerance can be temporary, following a stomach upset or chemotherapy, when it is caused by an inflammation of the lining of the stomach. Premature babies can also have a temporary lactase deficiency, which improves as their guts grow.

Overall, around 70% of the world’s population has some level of lactose intolerance. People from Asia, Africa and South America (or who have ancestors there) are more likely to be lactose intolerant to milk than people from Europe.

Lactose intolerance is treated by avoiding or reducing consumption of milk and dairy products. Some people with lactose intolerance can tolerate small to moderate amounts of milk and dairy products, and learn how much they can tolerate, and others can eat cheese, because it is lower in lactose than milk, and yoghurt, perhaps because of the ‘good’ bacteria.

Taking tablets or liquid containing lactase can helps the body break down the lactose in dairy food, and many shops sell lactose-reduced cows’ milk. Milk substitutes such as soya milk, rice milk, coconut milk and oat milk do not contain lactose. There are soya versions of cream, yogurt and cheese as well.

Milk allergy symptoms can be mild or severe, and include sickness and diarrhoea, stomach pain and bloating, rashes, itching, eczema and sneezing, coughing and problems with breathing.

Around 3-7% of babies less than a year old have a milk allergy, and many grow out of it by the time they are three. Some will remain allergic throughout their lives.

It is important to make sure that children with lactose intolerance or milk allergy take in enough nutrients, especially calcium – good sources of calcium include dark green leafy vegetables, broccoli, nuts and seeds, fish with soft, edible bones, such as tinned salmon and sardines, and seafood.

Why is Breakfast Important?
Share Your Story, Join the Discussion or Seek Advice..
if you have 4 children and one of them are gaining weight more than the other 3 and yet you have given them the ideal amount of food intake for there age how do you solve the problem
tricky - 2-Jul-12 @ 5:46 AM
Title:
(never shown)
Firstname:
(never shown)
Surname:
(never shown)
Email:
(never shown)
Nickname:
(shown)
Comment:
Validate: