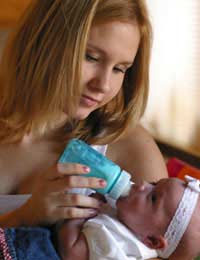 Babies who are not breastfed need to be bottle fed instead with formula milk. This is made from soy or cow’s milk modified to make it more suitable for a baby.

Making up a Feed from Powdered Milk

Making up Feeds in Advance

It’s a good idea to make up several bottles at once and store them in the fridge. Warm the bottle by putting it into a basin of hot water until it reaches the right temperature. Using a microwave is not advised because of the potential for overheating or ‘hot spots’ which could scald a baby’s mouth.

How and When to Feed

An advantage of bottle feeding is that other members of the family can help. Feeding is a great time for getting to know each other. Get comfortable, hold the baby close and tip the bottle so that milk completely fills the teat.

It’s a matter of personal choice whether to feed on demand or to follow a routine. For the first few weeks, it’s probably easiest to let the baby dictate when it needs to be fed. Some mothers feed on demand at first and then follow more of a routine (for example, every three or four hours) as a pattern starts to emerge.

Some babies feed more frequently in the evening, but go longer between feeds earlier in the day. Some babies may start to ‘go through the night’ after only a couple of months; others may take much longer. There are no hard and fast rules.

After a feed, gently rub or pat the baby’s back to help bring up any trapped wind.

How Much to Feed

New babies only take one or two ounces at first. As they grow, they’ll drink more. If they stop drinking, it means they are probably full – it’s best not to make them take more. If a baby is drinking the whole bottle, try an extra ounce to ensure they are getting enough. On very hot days, a bottle of cooled, boiled water will help keep the baby hydrated.

Steady weight gain, regular bowel movements and plenty of wet nappies are all signs that a baby is getting enough milk.

The Importance of Sterilising

Moving on to Cow’s Milk

Cow’s milk is best avoided as a drink until a child is at least one – although some dairy produce (such as yoghurt) can be introduced before that, as part of weaning. Formula milk is available for older children as well as babies, which has been specially designed with their nutritional needs in mind. A child can switch to whole cow’s milk at some time between 12 and 24 months, provided they’re eating a balanced diet. Formula milk has more iron than cow’s milk for example, so unless a child is getting iron from other sources, formula is preferable.

Moving on to a Cup

Most babies can drink from a cup with a spout at around nine months, but some will be ready earlier, while others will want to hang on to their bottles – particularly at bedtime. Bottles are a source of comfort and many toddlers still enjoy using them if their parents don’t object! However, the older a child is before they give up their bottle, the harder it is likely to be. A gradual switch is probably the kindest way. Try replacing one bottle a day with a cup, then two, and so on.