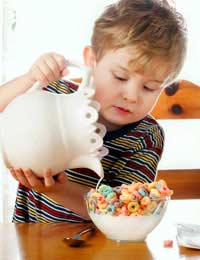 Food additives and artificial colourings have been under suspicion by cautious parents for years and it seems that they were right. The European Food Safety Authority has been studying the effects of these products and has uncovered a host of potential problems with their usage, especially in the developing bodies of children. Experts agree that most of these questionable food colourings will be banned (or at least phased out of usage) within a two year time span, good news for parents and children everywhere.

Hyperactivity in children has been linked with the consumption of food additives, specifically colourants, for a good thirty years now, and some manufacturers are finally beginning to heed the warnings and remove the problematic additives from their products. Consumer pressure cannot be underestimated in this change; competition amongst food manufacturers is tight and addressing consumer concern is vital for corporate survival. Nestle, Burton's Foods, Sainsbury's Kids and Marks & Spencer have all made efforts to reduce or eliminate the use of artificial dyes and food additives.

The following is a partial list of potentially dangerous additives/colourants, along with a short description of possible sources and problems. (Information taken from US National Library of Medicine's Public Medicine.)

Tartrazine (E102): Tartrazine is thought to be one of the most dangerous additives, causing special concerns for asthmatics and those who are intolerant of aspirin. This yellow dye is found in a wide variety of products, including, but not limited to instant puddings, cake mixes, fizzy drinks, mustard, yoghurt, chewing gum, and ice cream. It is sometimes contained in the outer shell of medicine capsules, as well. Tartrazine is believed to be closely associated with over-active disorders in children.

Ponceau 4R (E124): Like all azo dyes, Ponceau 4R can be problematic for those with an aspirin intolerance, and it is associated with an increase in symptoms in asthmatics. It is a suspected carcinogenic and has been banned in several countries, including Finland, Norway, and the U.S. In the UK, the Foods Standards Agency (FSA) found a link between Ponceau 4R and hyperactivity in children, especially when it is combined with other preservatives. It can be found in salami, dessert toppings, jellies and jams, pie fillings, and seafood dressings.

Carmoisine (E122): This red azo dye is thought to increase the incidence of hyperactivity in children and can commonly be found in jams and preserves, marzipan, sweets, brown sauce, and cheesecake mixes.

Quinoline yellow (E104): Ranging in colour from a dull yellow to a greenish yellow, this dye is found in scotch eggs, smoked haddock and ices. It is also used in some cosmetics and a wide range of medications, under the name FD&C Yellow #10.

Allura Red AC (E129): This orange-red colourant is found in condiments, sweets, drinks, and cosmetic products. In the U.S. Allura Red AC is used as a replacement for Amaranth (E123), which has been banned. While it is considered a bit less problematic for asthmatics than other azo dyes, its usage has been connected to cancer in mice.

Sodium Benzoate (E211): Used as a preservative in barbeque sauce, cheesecake mix, salad dressing, margarine, olives, pickles, baked goods, and soft drinks (especially orange soda), E211 can also be found in a wide variety of oral medications. Asthmatics, people who are aspirin sensitive and those who suffer from urticaris (a skin disease) should all avoid E211.

Many parents are opting to severely limit their children's consumption of processed foods, in hopes that they can limit or eliminate the adverse reactions commonly associated with their use. Colourants, preservatives, and artificial sweeteners have come under great scrutiny in recent years, with caution being the recommendation, especially when feeding children. It seems logical that simple, whole foods that are free from chemical additives would be the most healthful choices, and many modern parents are heeding the advice to eliminate unnecessary chemicals from their children's diets.

Choosing Healthy Foods for Kids When Eating Out

Fresh or Frozen Food: Which is Best?